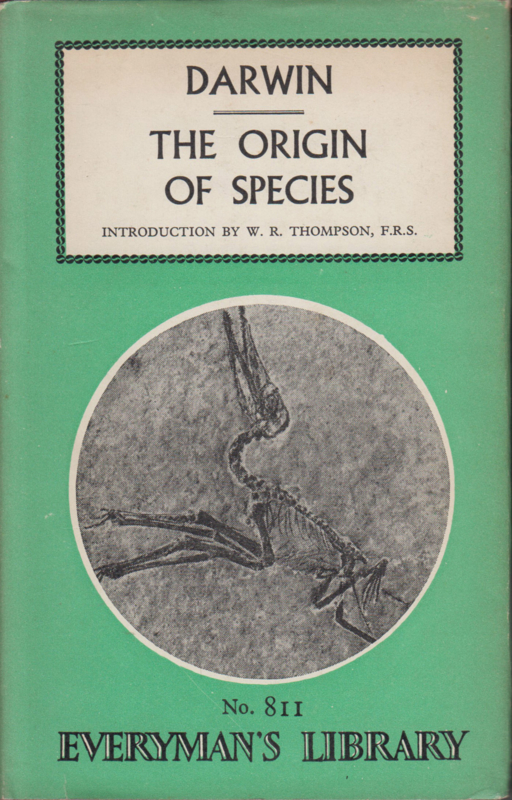 The Origin of Species, Charles Darwin

The writing Of the first edition of The Origin of Species occupied Darwin for twenty years of his life. It was published finally in his fiftieth year, but the mental processes out of which it was born began while Darwin was exploring the Galapagos Islands as a young man of twenty-two, in the expedition which he describes in The Voyage of the 'Beagle' (Everyman's Library, No. 104). The Everyman edition follows the text of the sixth edition and thus contains all Darwin's successive revisions and additions which he made over the twelve years following original publication, and the Everyman text indicates exactly what matter was so included and in which edition it first appeared.

W.R. Thompson, F.R.S., Director of the Commonwealth Institute of Biological Control, Ottawa, contributes an Introduction which challenges some of the assumptions that Darwin made, and places his great work in the light of later discovery concerning man's origin.

'Although, as he himself readily admitted, Darwin did not invent the doctrine of organic evolution, or even the idea of natural selection, his arguments, and especially the arguments in The Origin of Species, convinced the world that he had discovered the true explanation of biological diversity, and had shown how the intricate adaptations of living things develop by a simple, inevitable process which even the most simple minded and unlearned can understand.... The view expressed in this book that natural selection, leading to the survival of the fittest, in populations of individuals of varying characteristics and competing among themselves, has produced in the course of geological time gradual transformations leading from a simple primitive organism to the highest forms of life, without the intervention of any directive agency or force, is thus the essence of the Darwinian position.

The illustration on the front of this wrapper is a reproduction from a photograph by Stévan Célébonovic, taken from his book The Living Rocks'. The subject is a Jurassic flying reptile.