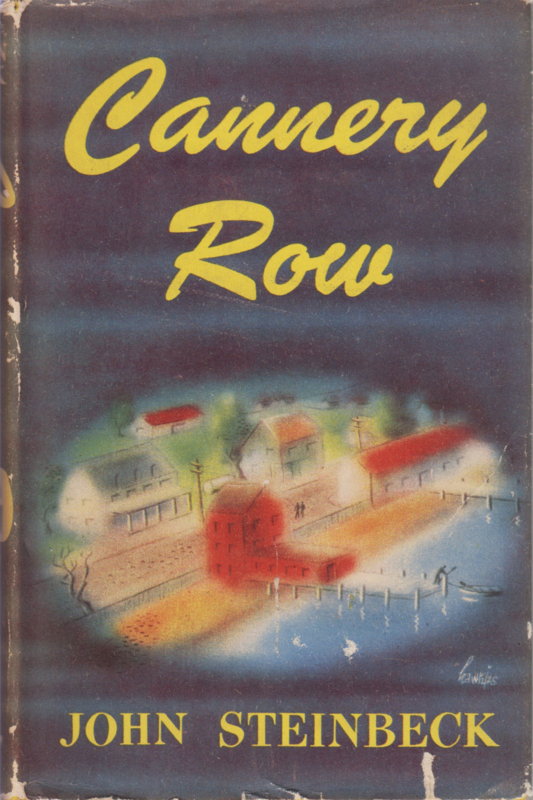 Cannery Row is just a few blocks long. Back of it is the inviolate ocean. Within its limits are the sardine fisheries which give the Row its name. There is the grocery store of Lee Chong, who sells clothing and food and firecrackers and a wonderful four-months-old whiskey, Old Tennessee on the label but Old Tennis Shoes to its devotees, most of whom buy it by the quarter-pint. There is the Palace Flop- house and Grill, inhabited by Mack and his friends, gentlemen and philosophers united by a common dislike of. a steady job and a mutual feeling for the pleasures of living according to their lights. There is the busy house presided over competently by Dora, the orangehaired madam: And then there is Doc, around whom the story whirls, and who is its center, Doc with his face that is 'half-Christ and half-satyr.' Doc runs the marine laboratory, and collects marine fauna, besides frogs, tomcats, and rattlesnakes which he supplies to laboratories for experimental purposes. He plays Gregorian music with the blinds down, administers unoffcially to sick puppies and children and unhappy souls, and is adored by the whole community.

The Story that builds up around this group of people is suffused with warmth and understanding and a great grasp of human values. It is also very, very funny, and even Steinbeck has never written a more hilarious account than the frog hunt, where Mack and the boys, aided by some fine corn whiskey, gather specimens for Doc, to raise funds to give him a whale of a party.

In Cannery Row John Steinbeck brings forth, as he did in Tortilla Flat, a world of his own, joyously conceived, with characters as universal as human nature. Here Steinbeck creates American folklore.

Condition is moderate/good. The book is still intact and complete with dust jacket. Foxing on the linen cover (see photo). The dust cover has clear signs of wear and minor damage.
Corner clipped from dust jacket flap (see photo). Handwritten name on endpaper.
Nevertheless, still a special edition. Book can go for an attractive price.