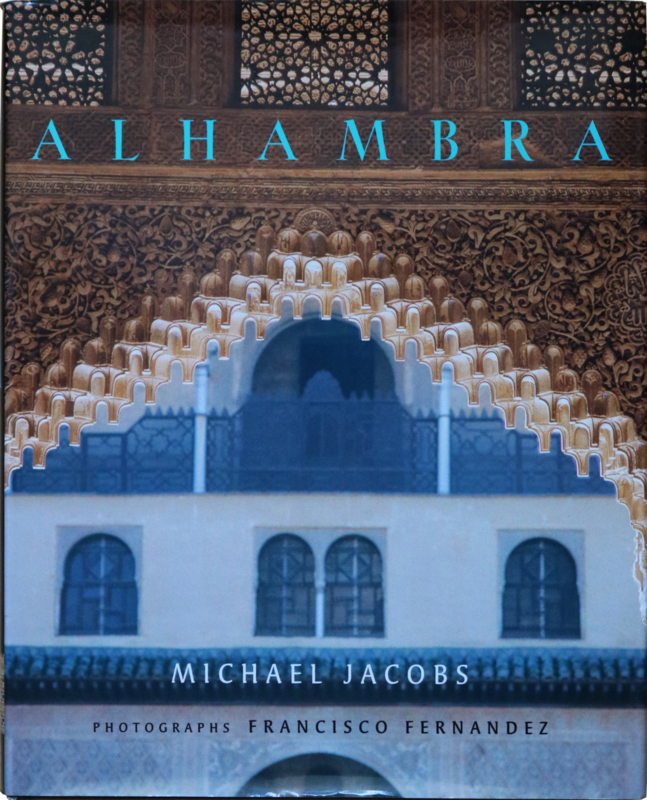 'The most perfectly beautiful place in the world'
AUGUSTUS HARE

FEW OTHER MONUMENTS in the world have such an extraordinary appeal to the imagination as the Alhambra — an appeal based on a virtually unrivalled combination of architectural brilliance, the seductive beauty of the setting, and a long and romantic history. With its lushly cultivated hill-top situation, exuberantly stuccoed interiors, abundance of pools and fountains, and backcloth of snowcapped mountains, the palace-fortress of the Alhambra is one of the peaks of Islamic achievement in art and living.

Michael Jacobs, acclaimed as the greatest writer on Spain since Richard Ford and George Borrow, takes an entirely fresh look at the historical context of Islamic Granada, a doomed civilization whose heyday is brought vividly to life, and he explains the origins and development of the dazzling architectural style that found its finest flowering in the Alhambra. Covered with some of the most elaborate decorative patterns ever created, and studded with poetry, epigrams and Koranic quotations, the Alhambra was designed to be enjoyed more like an illuminated manuscript than an ordinary building, and Jacobs draws on all the most recent research to recreate the meaning and pleasures of the style. The transformation of the building by the Catholic Kings and by Charles V, and the changes in fortune it has withstood since then to become one of the potent images of the Romantic mind, are explored with the help of the impressions and descriptions of early travellers. A detailed tour of the Alhambra and the adjoining summer gardens of the Generalife is included, explaining in detail the architecture, decoration and function of the rooms and courtyards.

This fascinating reassessment of the Alhambra, showing rooms rarely open to the public, is accompanied by breathtaking photography, paintings, drawings and prints, revealing the changing beauty of the monument through the seasons as never before.

MICHAEL JACOBS is a prolific writer on art history and travel and a translator of Spanish Latin Amerkan drama. He was in Italy and took his degree in Art History at the Courtauld Institute, where he received a Ph.D.in 1982 for his into 18th-century italian art. He is currently Honorary Research Fellow in the Department of Glasgow University.

FRANCISCO FERNANDEZ was born in Jaén, and lived for many years in the United States, studying and teaching at the New England School of Photography in Boston. He is now Professor of Photography at the Univerity of Granada, and in 1997 was nominated 'Doctor Honoris Causa'at De MontfortUniversity, Leicester. His photographs have been exhibited in Boston, Granada. Madrid, Jaén and Santander, and are in the collections of several including the Museum of Fine Arts, Boston and the Fine Arts Museum, Santander.