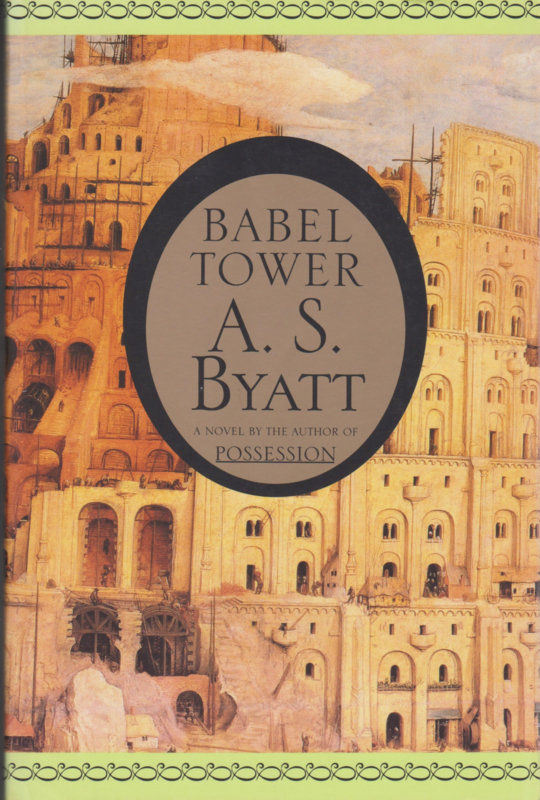 At the heart of Babel Tower are two law cases, twin strands of the Establishment's web, that shape the story: a painful divorce and custody suit and the prosecution of an "obscene" book. Frederica, the independent young heroine, is involved in both. She startled her intellectual circle of friends by marrying a young country squire, whose violent streak has now been turned against her. Fleeing to London with their young son, she gets a teaching job in an art school, where she is thrown into the thick of the new decade. Poets and painters are denying the value of the past, fostering dreams of rebellion, which focus around a strange, charismatic figure -- the near-naked, unkempt and smelly Jude Mason, with his flowing gray hair, a hippie before his time.

We feel the growing unease, the undertones of sex and cruelty. The tension erupts over his novel Babbletower, set in a past revolutionary era, where a band of people retire to a castle to found an ideal community. In this book, as in the courtrooms, as in the art school's haphazard classes and on the committee set up to study "the teaching of language," people function increasingly in groups. Many are obsessed with protecting the young, but the fashionable notion of children as innocent and free slowly comes to seem wishful, and perilous.

Babel Tower is the third, following 'The Virgin in the Garden' and 'Still Life', of a planned quartet of novels set in different mid-century time frames. The personal and legal crises of Frederica mirror those of the age. This is the decade of the Beatles, the Death of God, the birth of computer languages. In Byatt's vision, the presiding genius of the 1960s seems to be a blend of the Marquis de Sade and The Hobbit. The resulting confusion, charted with a brilliant imaginative sympathy, is as comic as it is threatening and bizarre.

By the author of Possession.