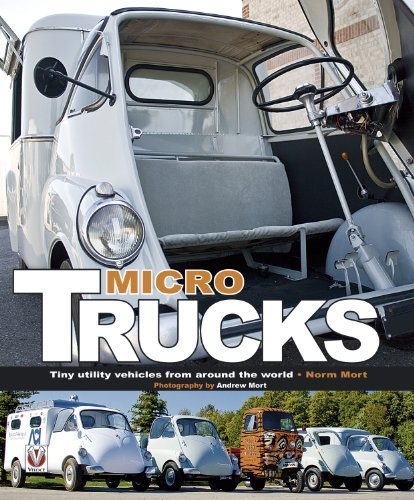 Tiny ultility vehicles from around the world

The interest and fascination these novel cars generate have made micro vehicles significant collectibles over the past decade, and yet information published on micro trucks has been almost non-existent. Old brochures printed by numerous micro-car builders depict the various truck versions available. In the case of Iso, everything from hook and ladder to vans to pickups were featured, but few if any examples were thought to have been built beyond the prototype stage. This title features full colour photography, text and specs that describe previously unseen Iso production micro trucks, as well as featuring the changes necessary for converting the production Iso into a micro truck. Also featured are rare Topolino Fiat vans, as well as more common production micro trucks from Autobianchi, Moto Guzzi, Vespa Ape, New Map Solyto and Diahatsu. Rare Topolino Fiat vans ready for full restoration are also shown. Whereas very few 1950 Fiat 500 Topolino C Furgone models exist, there is only one known 1948 Fiat 500 Topolino B Furgone believed to have survived. As well, this volume covers the somewhat more familiar production versions built by Moto Guzzi and New Map Solyto. For micro car enthusiasts wanting to expand their collection, this volume includes the more commonly available micro trucks from Autobianchi, Vespa and Diahatsu along with helpful hints on restoration.
This title is illustrated with 91 colour photos, many of never-before-seen micro trucks.

Price not include costs shipping